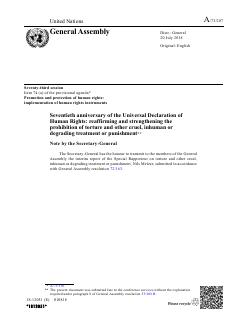 Report to the GA taking stock of the achievements over the past seven decades in terms of making the absolute prohibition of torture and ill-treatment a practical reality. It examines some of the most serious challenges facing its universal implementation today and offers recommendations on how best to meet those challenges.