Previous 2 / 3 Next
Normal view
A/HRC/46/26/Corr.1 namely, the Dominican Republic, India, Kenya, Malawi and South Africa), but failed to elicit any reaction from the Government concerned. 3. Paragraph 91 The paragraph should read 91. Of the 57 Governments that received visit requests, 10 (18 per cent) showed “partial cooperation” with the mandate holder, including five States that had issued a standing invitation to the special procedures (Guatemala, Iran (Islamic Republic of), Lebanon, Malaysia and Thailand). In other words, the Government responded to a request for a visit transmitted by the mandate holder but, for reasons beyond the control of the Special Rapporteur, did not issue a firm invitation to conduct an official visit, owing to scheduling difficulties for the Government or the Government’s disagreement with the official terms of reference for country visits. Some Governments proactively maintain a dialogue with the Special Rapporteur, particularly through yearly meetings on the margins of Human Rights Council sessions; despite repeated requests for a country visit and numerous allegations of torture and ill-treatment, however, they consistently fail to allow the Special Rapporteur to conduct an official visit to their country. 4. Paragraph 92 The paragraph should read 92. Of the 57 Governments that received a request for a country visit during the period under review, only 12 (21 per cent), including 11 that had issued a standing invitation, showed “full cooperation” with the mandate holder in that they hosted an official country visit (Argentina, Comoros, Kosovo, Maldives, Serbia, Turkey, Ukraine and the United Kingdom of Great Britain and Northern Ireland) or extended a firm invitation (Libya, Mongolia, Paraguay and Spain) to the Special Rapporteur, who however declined or postponed the envisaged country visit for reasons relating to regional distribution or operational priorities. The regional distribution of States visited was Africa (1), Asia-Pacific (1), Eastern Europe (3), Latin America and the Caribbean (1) and Western Europe and others (2). The average time elapsed between a request for a country visit by the mandate holder and the conduct of the within the mandate is one year and two months; the shortest time was four months (Sri Lanka), while the longest was two years and eight months (Argentina). 5. Paragraph 93 The paragraph should read 93. Of the eight country visits conducted during the period under review, all except one was carried out in accordance with the terms of reference of the mandate. Regrettably, the visit to Comoros had to be suspended, given that full access to places of detention was impeded and the modalities did not comply with the terms of reference. 6. Paragraph 97 The paragraph should read 97. As at October 2020, 45 requests for a country visit were pending. A total of 35 of the States concerned (78 per cent) had not given any response whatsoever concerning the requests. According to the Manual of Operations for Special Procedures, in cases where a State does not respond to a request for an invitation to visit, it is appropriate for the mandate holder to remind the Government concerned, to draw the attention of the Human Rights Council to the outstanding request, and to take other appropriate measures designed to promote respect for human rights. 7. Paragraph 101 The paragraph should read 101. More specifically, in the course of the past four years, the Special Rapporteur transmitted requests for a country visit to 57 Governments, of which 30 had issued a 2 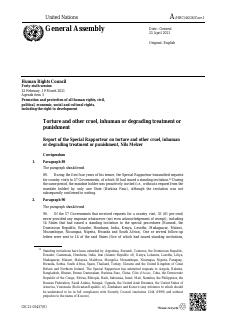 Corrigendum to the report on the effectiveness of the cooperation shown by States in their responses and follow-up to official communications and country visit requests transmitted by the Special Rapporteur.