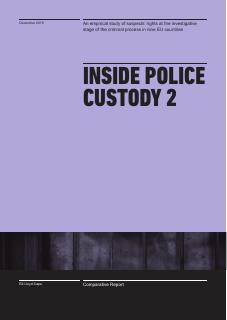 The project was designed and implemented by the Irish Council for Civil Liberties (ICCL) in collaboration with the Open Society Justice Initiative (OSJI). The project management team consisted of Liam Herrick and Stephen O’Hare (ICCL), Zaza Namoradze and Irmina Pacho (OSJI), and the research consultant to the project, Emeritus Professor Ed Cape (University of the West of England, Bristol). The research in the nine countries included in the study was carried out by staff of the partner organisations: the Ludwig Boltzmann Institute of Human Rights, Austria; the Bulgarian Helsinki Committee, Bulgaria; the Hungarian Helsinki Committee, Hungary; Associazione Antigone, Italy; the Human Rights Monitoring Institute, Lithuania; the Helsinki Foundation for Human Rights, Poland; the Association for the Defence of Human Rights in Romania – the Helsinki Committee, Romania; the Peace Institute, Slovenia; and Rights International, Spain