Previous 1 / 19 Next
Normal view
CCPR/C/130/D/3042/2017 United Nations International Covenant on Civil and Political Rights Distr.: General 28 April 2021 Original: English Human Rights Committee Views adopted by the Committee under article 5 (4) of the Optional Protocol, concerning communication No. 3042/2017*, **, *** Communication submitted by: A.S., D.I., O.I. and G.D. (represented by counsel, Andrea Saccucci) Alleged victims: The authors and S.A. et al. State party: Italy Date of communication: 19 May 2017 (initial submission) Document references: Decision taken pursuant to rule 92 of the Committee’s rules of procedure, transmitted to the State party on 14 November 2017 (not issued in document form) Date of adoption of Views: 4 November 2020 Subject matter: Rescue operations at sea Procedural issues: Jurisdiction; exhaustion of domestic remedies Substantive issues: Right to life; inhuman and degrading treatment; right to an effective remedy Articles of the Covenant: 2 (3), 6 and 7 Articles of the Optional Protocol: 1 and 5 (2) (b) 1.1 The authors of the communication are A.S., a national of the State of Palestine, born in 1958, and D.I., O.I. and G.D., nationals of the Syrian Arab Republic, born in 1983, 1988 and 1977, respectively. They are submitting the communication on their own behalf and on behalf of 13 of their relatives who, on 11 October 2013, were on board a vessel that shipwrecked in the Mediterranean Sea, 113 km south of the island of Lampedusa, Italy, and 218 km from Malta, which is estimated to have caused the death of more than 200 people. A.S. submits the communication on behalf of 11 members of his family: his brother, born in 1952; his son-in-law, born in 1977; his niece, born in 1983; his son, born in 1987; his daughter, born in 1987; his daughter-in-law, born in 1992; his son, born in 1997; his granddaughter, * Adopted by the Committee at its 130th session (12 October–6 November 2020). ** The following members of the Committee participated in the examination of the communication: Yadh Ben Achour, Arif Bulkan, Ahmed Amin Fathalla, Furuya Shuichi, Christof Heyns, David H. Moore, Duncan Laki Muhumuza, Photini Pazartzis, Hernán Quezada Cabrera, Vasilka Sancin, José Manuel Santos Pais, Yuval Shany, Hélène Tigroudja, Andreas Zimmermann and Gentian Zyberi. *** A joint opinion by Committee members Yuval Shany, Christof Heyns and Photini Pazartzis (dissenting), and individual opinions by Committee members Andreas Zimmermann (dissenting), David H. Moore (dissenting), Gentian Zyberi (concurring), José Manuel Santos Pais (concurring), Vasilka Sancin (concurring) and Hélène Tigroudja (concurring) are annexed to the present Views. GE.21-05610(E) 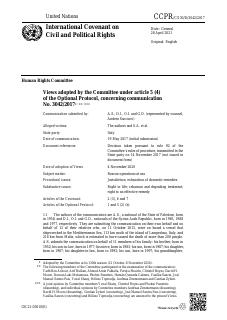