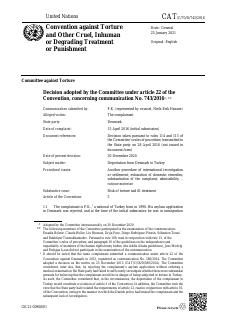 It should be noted that the same complainant submitted a communication under article 22 of the Convention against Denmark in 2013, registered as communication No. 580/2014. The Committee adopted a decision on the merits on 23 November 2015 (CAT/C/56/D/580/2014). The Committee considered, inter alia, that, by rejecting the complainant’s asylum application without ordering a medical examination, the State party had failed to sufficiently investigate whether there were substantial grounds for believing that the complainant would be in danger of being subjected to torture in Turkey. As such, the Committee considered that, in the circumstances, the deportation of the complainant to Turkey would constitute a violation of article 3 of the Convention. In addition, the Committee took the view that the State party had violated the requirements of article 12, read in conjunction with article 16, of the Convention, owing to the manner in which the Danish police had treated the complainant and the subsequent lack of investigation