Previous 1 / 17 Next
Normal view
54/91-61/91-96/93-98/93-164/97_196/97-210/98 : Malawi Africa Association, Amnesty International, Ms Sarr Diop, Union interafricaine des droits de l'Homme and RADDHO, Collectif des veuves et ayantsDroit, Association mauritanienne des droits de l'Homme / Mauritania Summary of Facts 1. These communications relate to the situation prevailing in Mauritania between 1986 and 1992. The Mauritanian population, it should be remarked, is composed essentially of Moors (also known as ‘Beidanes’) who live in the North of the country, and various black ethnic groups, including the Soninke, Wolofs and the Hal-Pulaar in the South. The Haratines (freed slaves) are closely associated with the Moors, though they physically resemble the Black population of the South. 2. Following a coup d’état that took place in 1984, and which brought Colonel Maaouya Ould Sid Ahmed Taya to power, the government was criticised by members of the Black ethnic groups for marginalising Black Mauritanians. It was also criticised by a group of Beidanes who favoured closer ties with the Arab world. 3. Communication 61/91 alleges that in early September 1986, over 30 persons were arrested in the aftermath of the distribution of a document entitled “Le Manifeste des negro-mauritaniens opprimés” (Manifesto of the Oppressed Black Mauritanians). The document provided evidence of the racial discrimination to which the Black Mauritanians were subjected and demanded the opening of a dialogue with the government. Twenty-one persons were found guilty of holding unauthorised meetings and pasting and distributing publications that were injurious to the national interest, and of engaging in racial and ethnic propaganda. They were convicted and imprisoned, after series of trials that took place in September and October 1986. The accused had been held in custody for a period that was longer than provided for in Mauritanian law. They did not have access to their lawyers before the trials started. The lawyers, therefore, did not have time to prepare the cases, for which reason they withdrew, leaving the accused without defence counsel. The president of the tribunal considered that the refusal of the accused to defend themselves was tacit acknowledgement of their guilt. The trial was conducted in Arabic, even though only three of the accused were fluent in the language. The accused were thus found guilty on the basis of statements made to the police during their time in custody. They however pointed out to the tribunal that some of these statements had been given under duress. The sentences ranged from six months to five years imprisonment with fines, and five – ten years of house arrest. 4. The accused filed an appeal, claiming unfair trial, stating that they were not charged in due time; and that they did not have the opportunity to be defended. On 13 October 1986, the Court of Appeal upheld the sentences, even though the public prosecutor had not contested the appeal. 5. In September 1986, another trial against one Captain Abdoulaye Kébé took place before a special tribunal presided by a military officer; and no appeal was permitted. Captain Kébé was charged with violating military regulations by providing statistics on the racial composition of the army command, which were then quoted in the “Manifeste des negro-mauritaniens opprimés”. He was held in solitary confinement before his trial, with no access to lawyers, and did not have sufficient time to prepare his defence. He was sentenced to two years imprisonment and twelve years house arrest. 6. In October 1986, a third trial relating to the Manifesto was brought against 15 persons. They were charged with belonging to a secret movement, holding unauthorised meetings and distributing tracts. Three of them were given suspended sentences and the others acquitted. 7. After the 1986 trial, there were protests against the conviction of the authors of the Manifesto. These brought about further arrests and trials. 8. In March 1987, 18 persons were charged before a criminal court for arson. They were not allowed family visits during the five months that their detention lasted. Many of them were alleged to be members of the support committee, established after the first trial relating to the Manifesto, to provide material and moral support to the families of the detainees. Most of the detainees were beaten during their detention. After the trial, nine accused were found guilty and sentenced to prison terms ranging 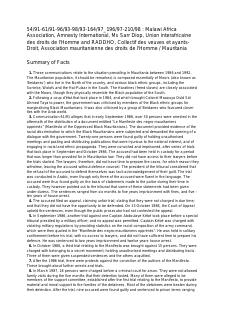