Previous 1 / 15 Next
Normal view
T O O L UNCAT Exclusionary Rule Tool 8/2020 NON-ADMISSION OF EVIDENCE OBTAINED BY TORTURE AND ILL-TREATMENT: PROCEDURES AND PRACTICES The effectiveness of a State’s criminal justice system depends on the trust of the people it serves. The ways that the police and other law enforcement agencies investigate crime, interview suspects, witnesses and victims, and collect evidence are crucial to build and maintain that trust. Where torture and ill-treatment are used to achieve confessions or other information or evidence, that confidence can be broken. The rule of nonadmission of evidence in any proceedings obtained by torture or ill-treatment (also known as the “exclusionary rule”, and found in Article 15 of the UN Convention against Torture and Other Cruel, Inhuman or Degrading Treatment or Punishment (UNCAT)) puts an important break on corrupt practices, removes one of the primary incentives for abuse, and safeguards due process rights and the fairness of court proceedings. Applying this rule helps dismantle unreliable confession-based policing and results in better and more reliable evidence gathering and investigations. This tool sets out a variety of legislative, policy and practical measures and procedures adopted by States to prohibit and prevent evidence being obtained by torture and ill-treatment and subsequently used in domestic criminal processes. It is intended to assist officials – notably the police, prosecutors, medical practitioners, and judges – on how to avoid and exclude such evidence obtained by torture or ill-treatment. Experience shows that a proper process for preventing and excluding the use of evidence (including confessions) obtained as a result of torture or ill-treatment, helps minimise the risks and incentives that lead to the use of torture and ill-treatment in the first place. Torture evidence: The tool will use the phrase ‘torture evidence’ as short-hand to refer to all forms of evidence extracted through the use of torture or other cruel, inhuman or degrading treatment or punishment, including confessions, other information and other forms of evidence. The tool also gives examples, based on State experiences, which cover the non-admission of evidence extracted through coercion, duress, intimidation, oppression or other illegal means. The CTI ‘UNCAT Implementation Tools’ are a series of practical tools designed to share good practices among States on the implementation of the UN Convention against Torture and Other Cruel, Inhuman or Degrading Treatment or Punishment (UNCAT). They offer thematic guidance and ideas for State practitioners and policymakers as they develop or revise contextspecific strategies, mechanisms and procedures to prevent torture and other forms of ill-treatment or punishment, and provide remedies for victims. 1/15

CTI (2020) Non-Admission of Evidence Obtained by Torture and Ill-treatment: Procedures and Practices 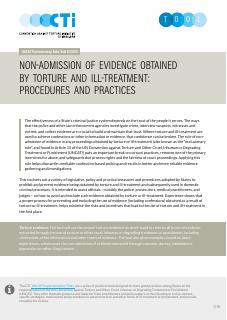