Previous 1 / 59 Next
Normal view
Lesbian, gay, bisexual and transgender (LGBT) persons have historically faced and continue to face discrimination and violence around the world. When deprived of their liberty, they find themselves in a particular situation of vulnerability and are at risk of serious human rights violations. National Preventive Mechanisms (NPM) established according to the Optional Protocol to the Convention Against Torture (OPCAT) have an important role to play in preventing abuses and ill-treatment against LGBT persons in detention. On 3 and 4 June 2015, the Association for the Prevention of Torture (APT) organised the Second Jean-Jacques Gautier Symposium focused on the theme Addressing situations of vulnerability of LGBT persons in detention. The meeting took place in Geneva and aimed to address situations of vulnerability and risks faced by LGBT persons deprived of their liberty and to sensitise and train NPMs to better respond to this issue. • 2015 Addressing vulnerabilities of LGBT persons in detention This symposium was the second in a series of annual meetings to allow NPM and other experts to share their knowledge and practices with regard to situations of vulnerability in detention. This document is the final report of the second Jean-Jacques Gautier Symposium. Its purpose is not to provide a detailed account of the two-day meeting, but rather to highlight the issues, strategies and main tracks identified during the discussions. ISBN 978-2-940337-87-3 10 CHF 8 ¤ APT • P.O. Box 137 • 1211 Geneva 19 • Switzerland • www.apt.ch FINAL REPORT 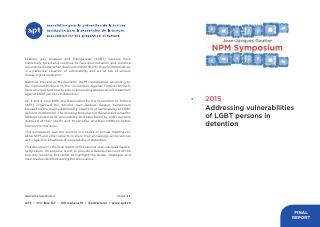